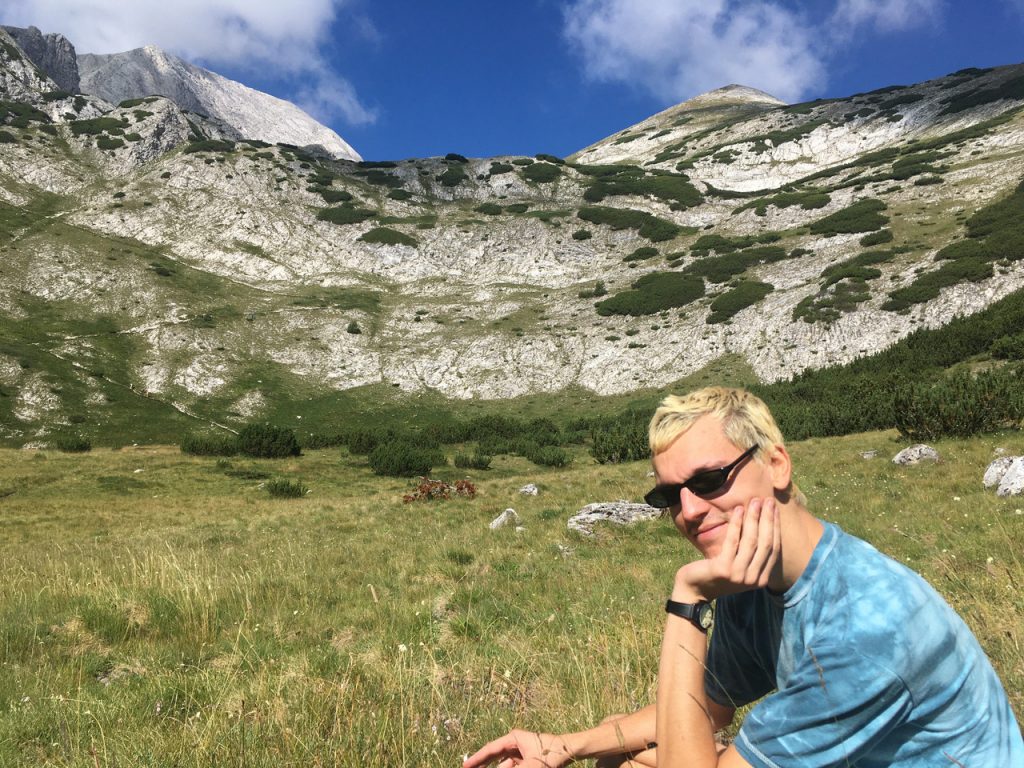 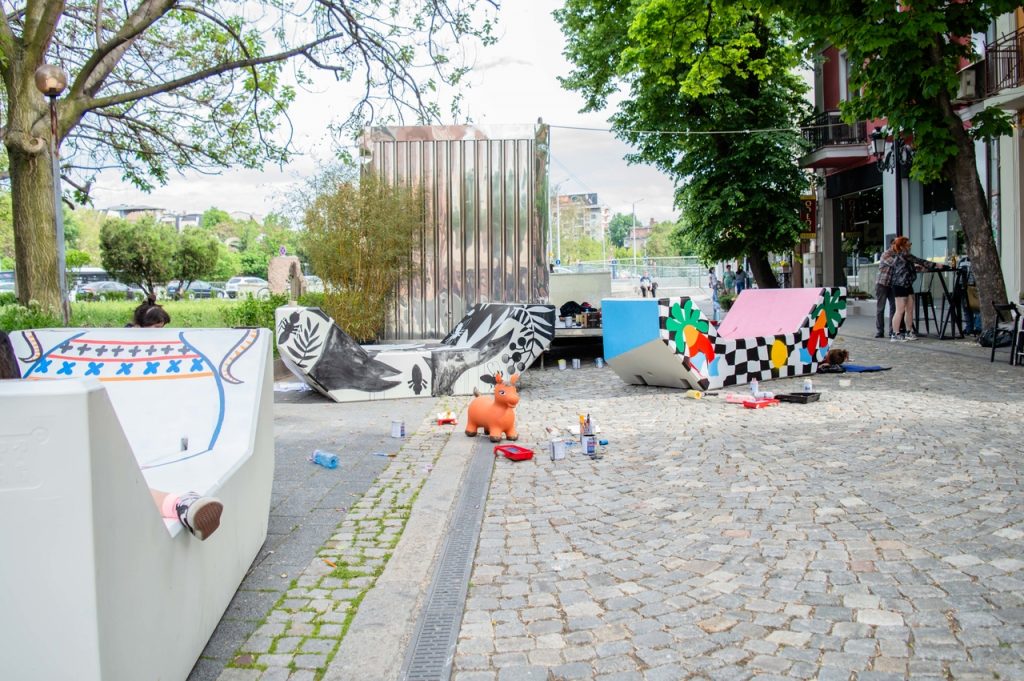 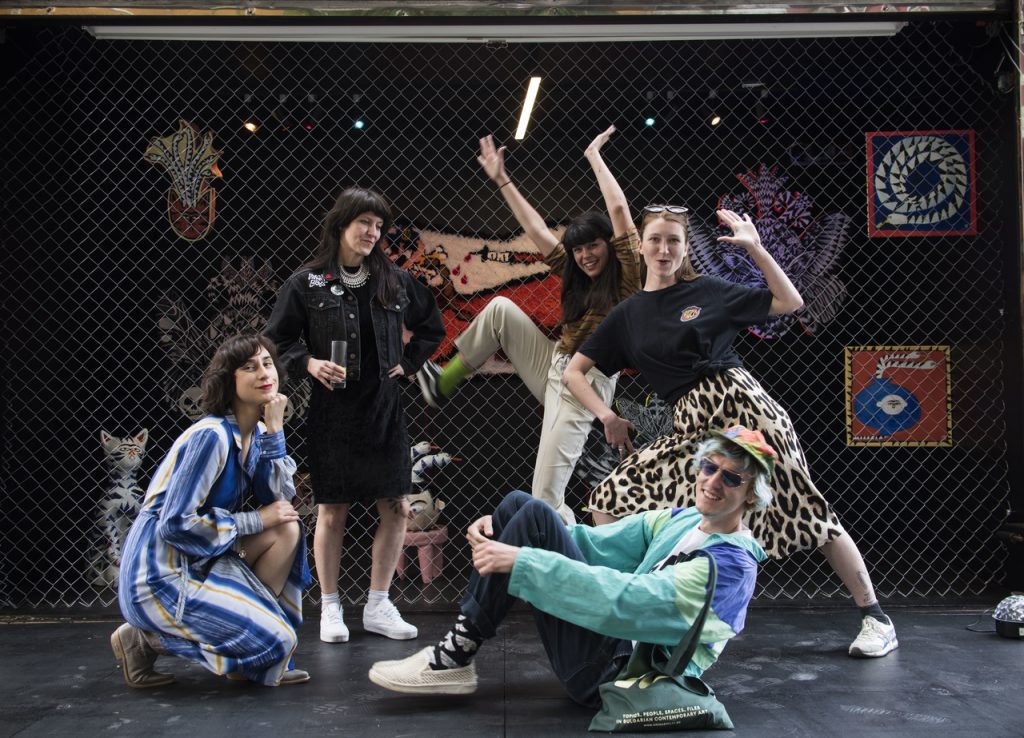 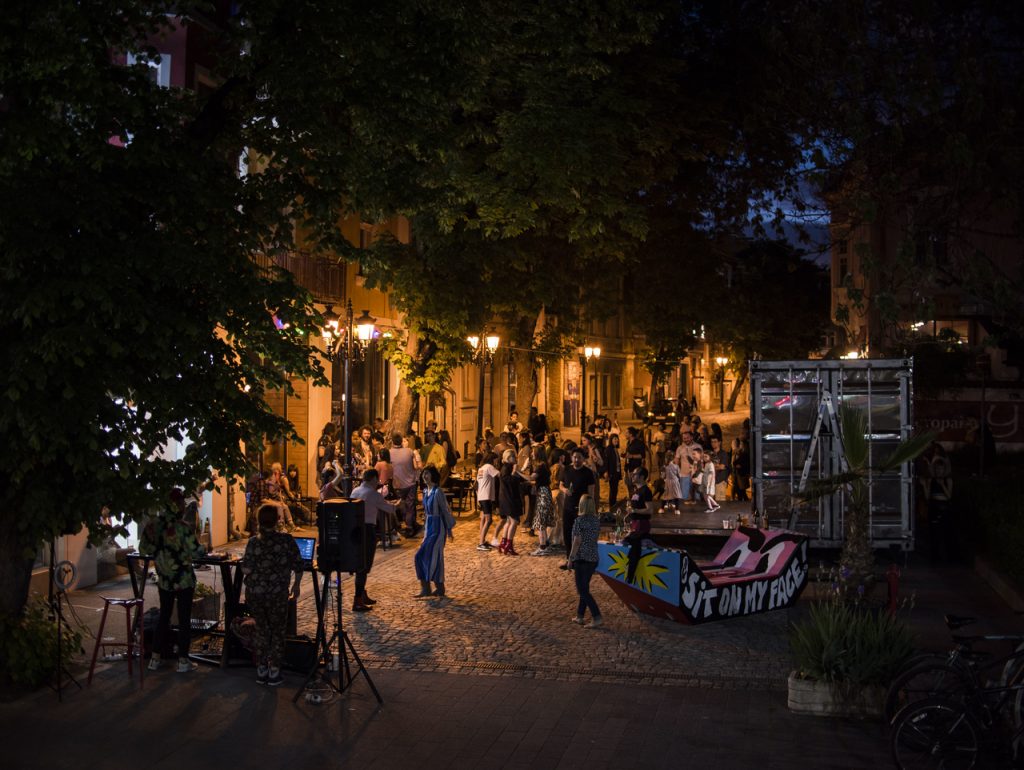 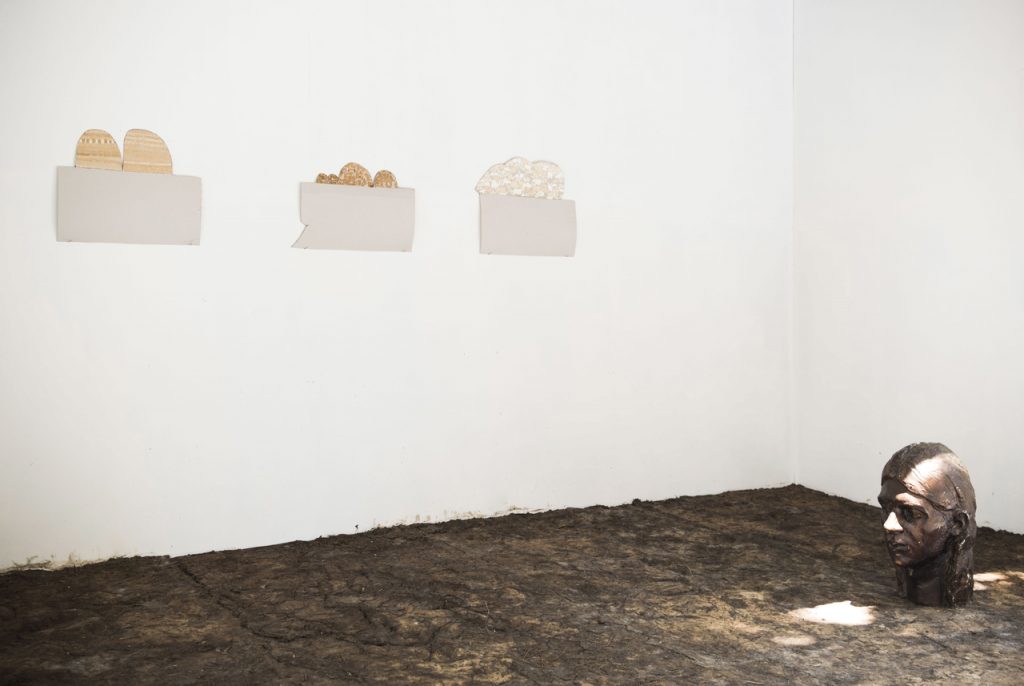 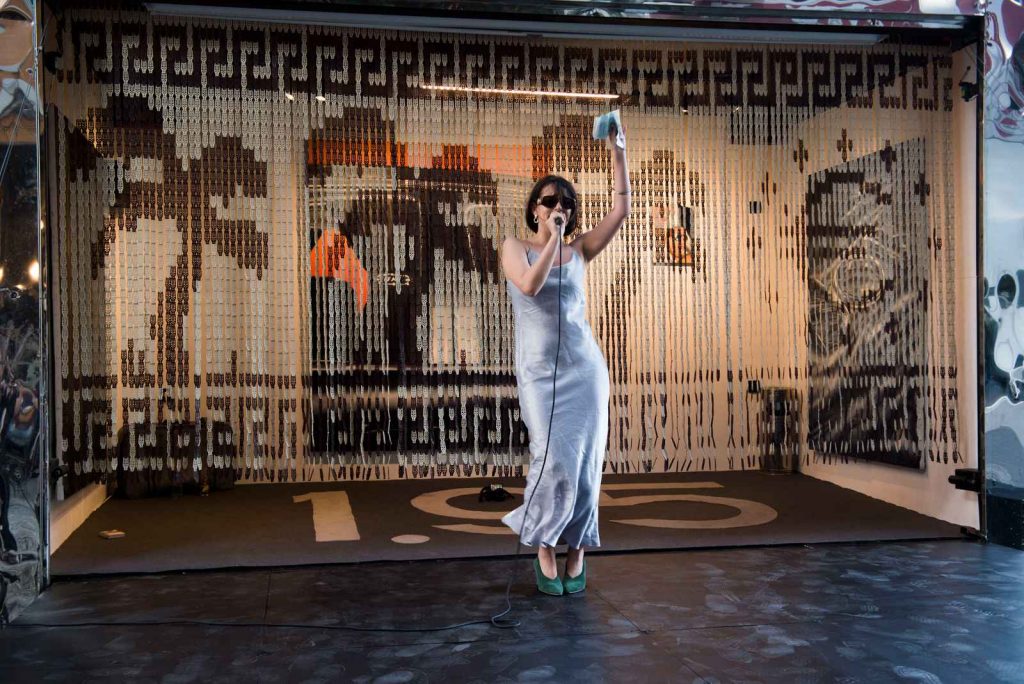 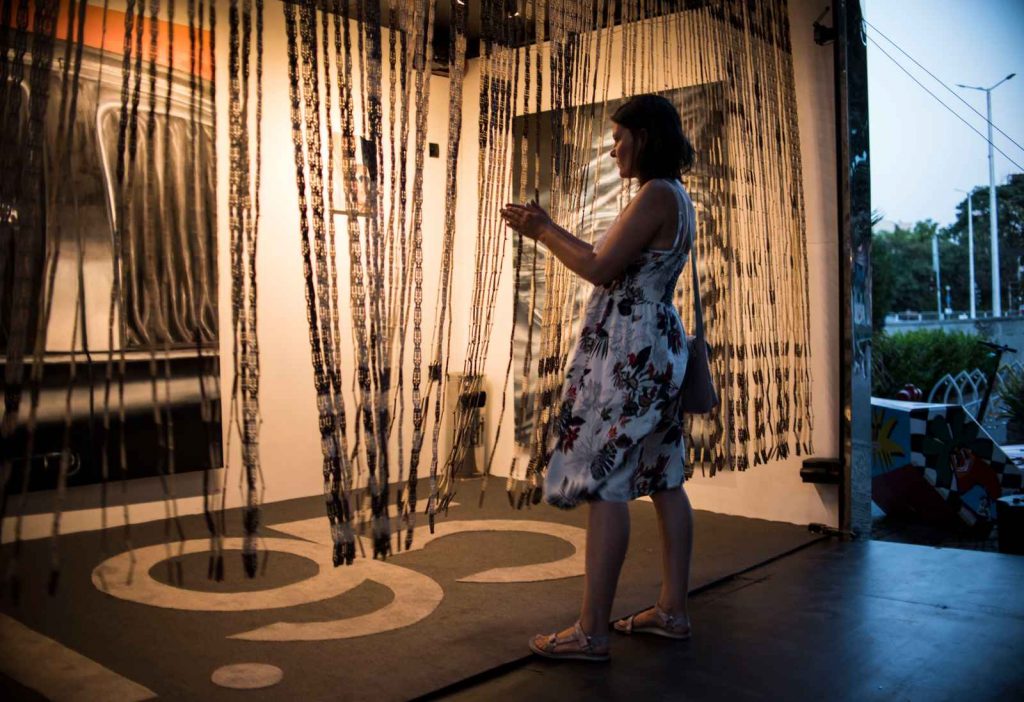 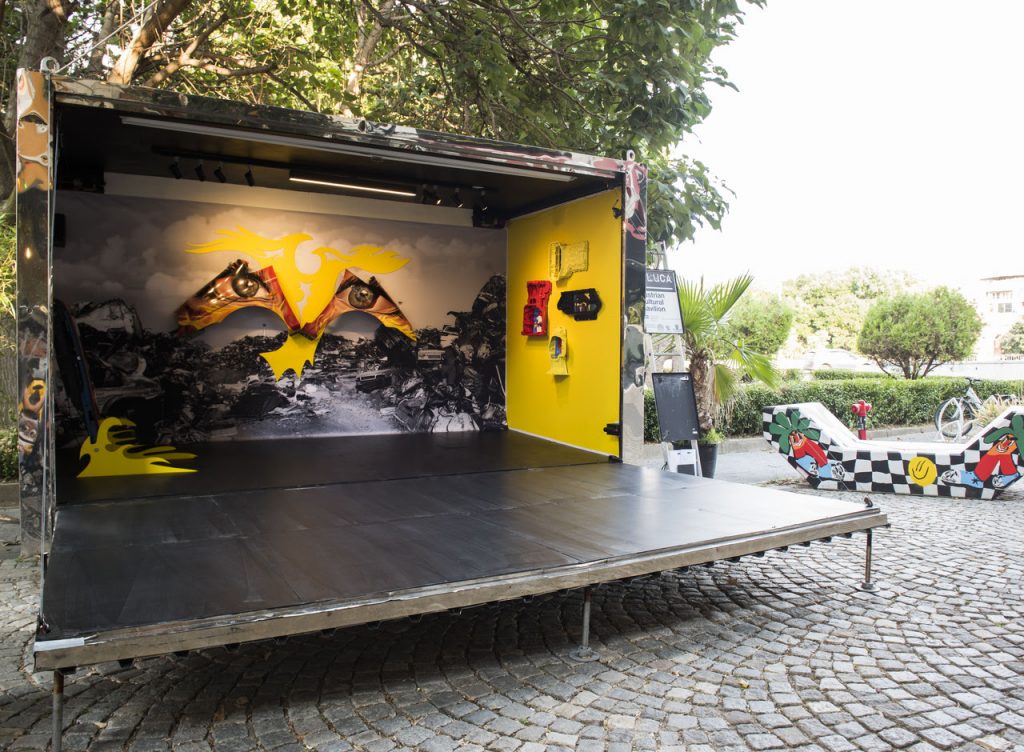 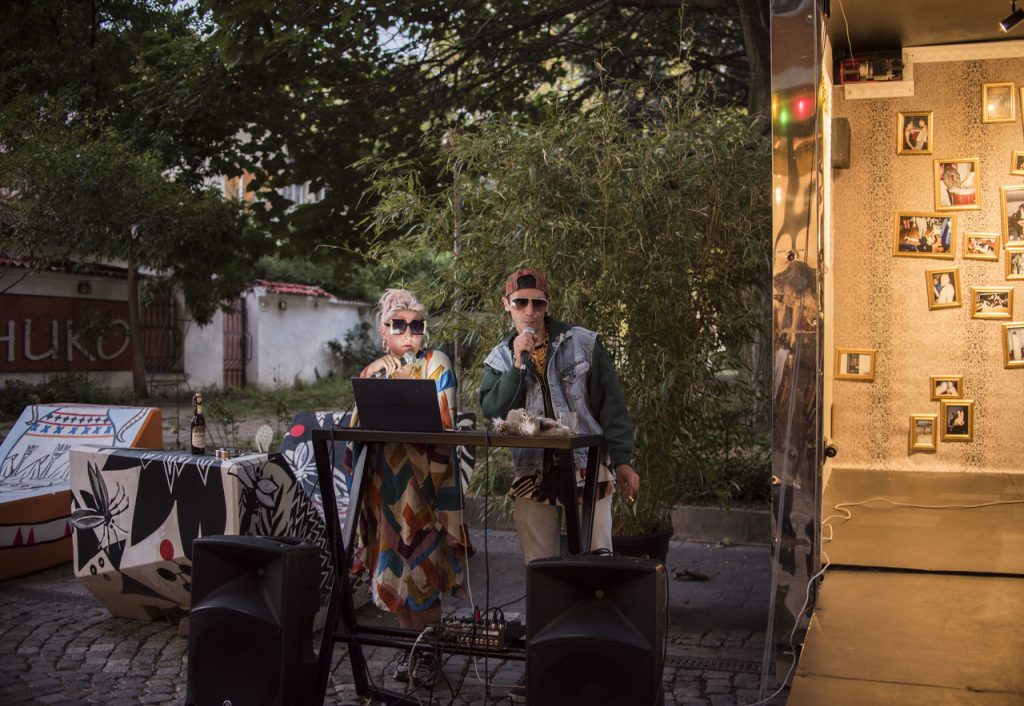 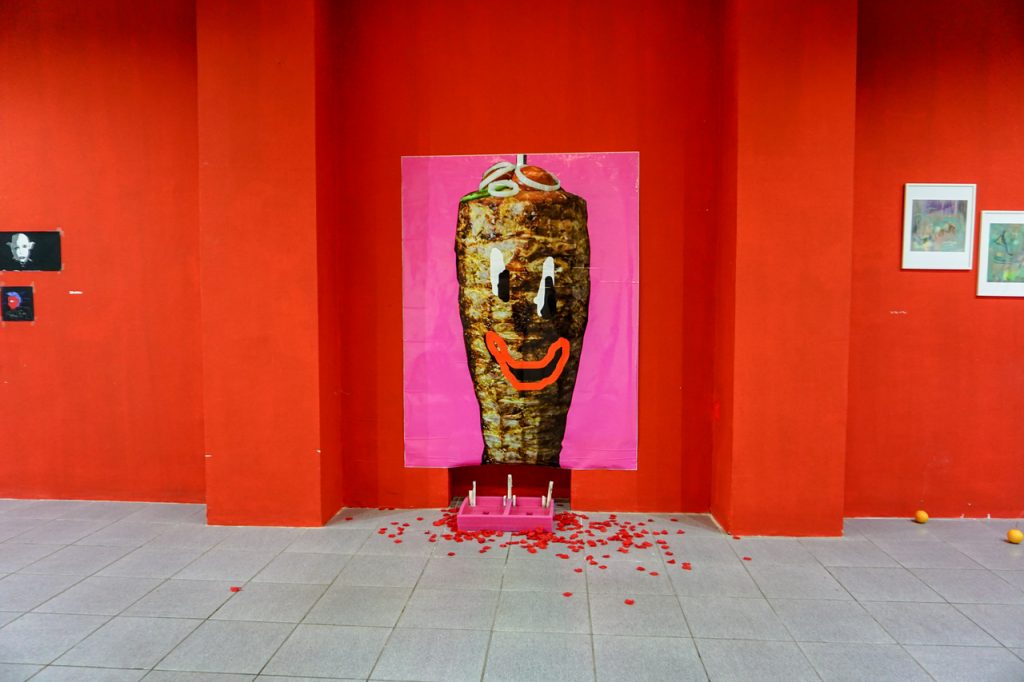 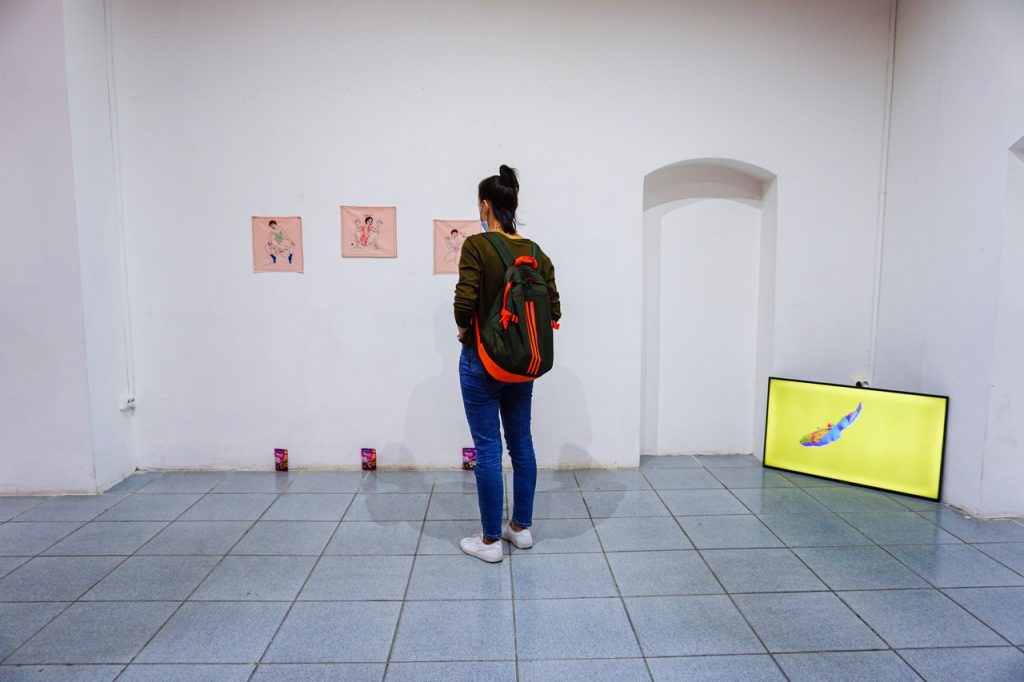 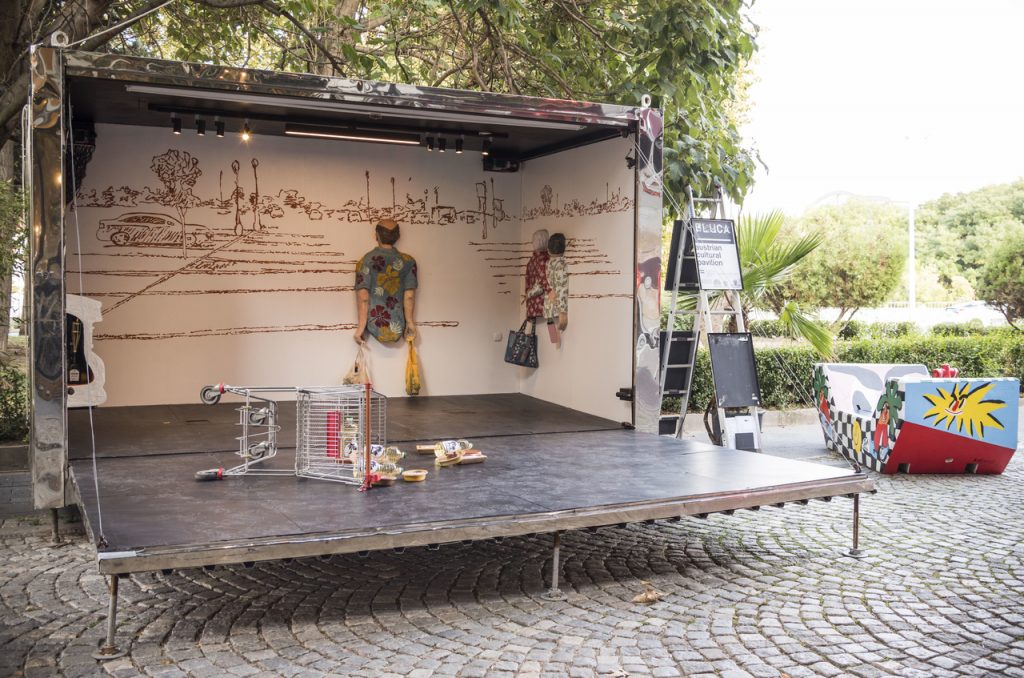 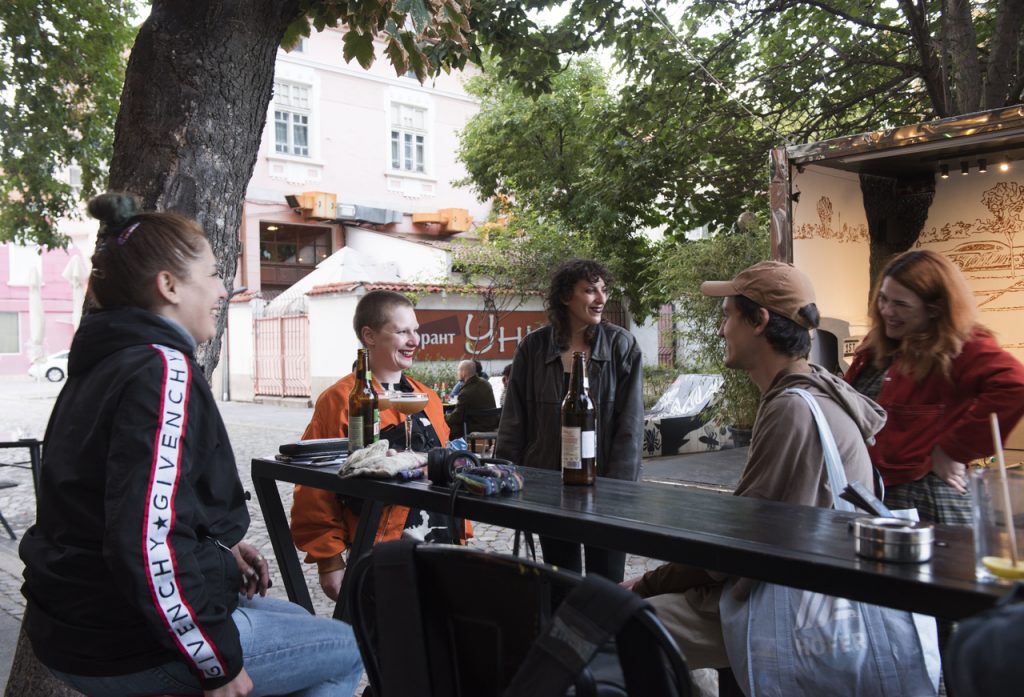 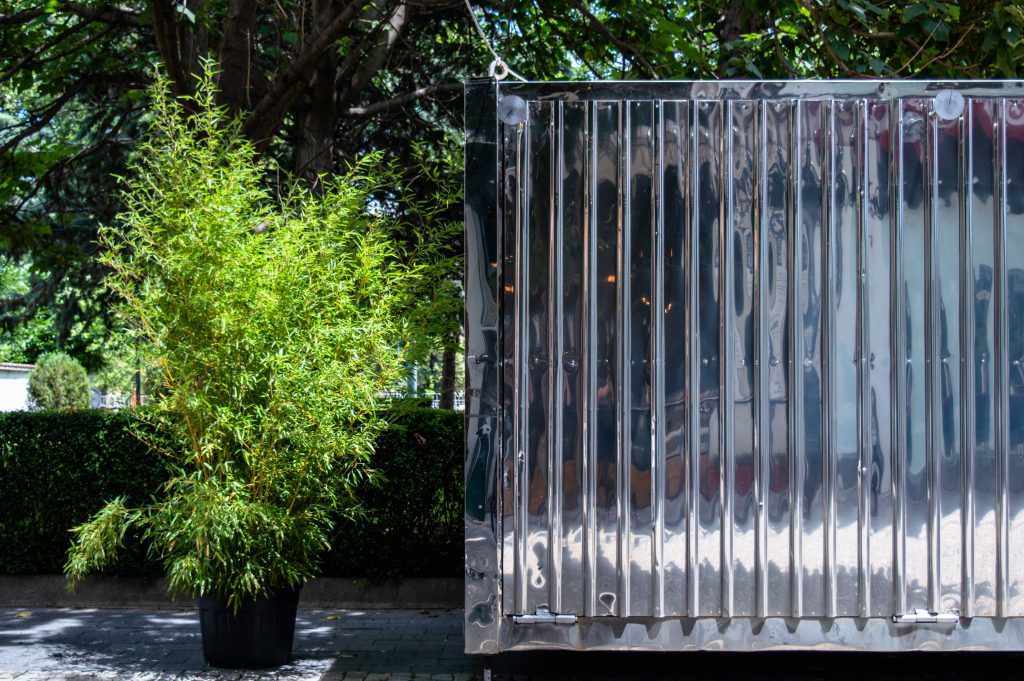 Fluca – Austrian Cultural Pavilion is an open stage for art and culture, located at the end of Otets Paisiy Street in Plovdiv and is an integral part of a cultural center without a roof, which is formed by Sarieva gallery, artnewscafé,  Open Arts foundation’s office and other elements that turn the space at the end of Otets Paisiy Street into a kind of „art oasis“. The container, itself an art object, functions as an alternative to a gallery space, stage and art pavilion.

In 2021, the curator of the sixth season of FLUCA was the young visual artist, who also practices as an independent curator Valko Chobanov. His vision for the season was for Fluca to become a place for artistic collaboration, where artists feel free to share their independent views. In the coziness of the street and involving the invited artists foremost, the curatorial program tackles a discussion over aesthetics, kitsch, nature, design, pop culture and the confluence of pleasures. Apart from its already recognizable, physically reflective surface reflecting all light, within the current FLUCA program the container set to capture in its mirror fragments that are recognizable as ongoing in the current artistic field through a meta image of the presented artists’ creative work.

On the stage of FLUCA with new works and projects created for Fluca, we saw solo and group exhibitions of Bulgarian and Austrian, young and established artists.

For its sixth season in 2021 FLUCA – Austrian Cultural Pavilion, Open Arts Foundation and Vesselina Sarieva invite Valko Chobanov as curator. He is a visual artist who also practices as an independent curator. In 2020, on the stage of FLUCA, he realized the exhibition „particular impulse“.

FLUCA – Austrian Cultural Pavilion is a long-term cultural project – an initiative of the Open Arts Foundation (Plovdiv), the Austrian Embassy in Sofia, supported by the Austrian Federal Chancellery  and the Municipality of Plovdiv.

In 2021 FLUCA is supported by the National Culture Fund – Annual Program for Support of Professional Organisations in the Field of Arts.

Valko Chobanov was born in 1991 in Plovdiv. He graduated in Scenography at the Academy of Music, Dance and Fine Arts, Plovdiv and Digital Arts at the National Academy of Arts, Sofia, Bulgaria. He works in the media of painting, video art and performance. In 2017 he had his first solo exhibition „Inorganic / Organic“ at Coffee & Gallery Cu29, Plovdiv, with the support of the Gaudenz B. Ruf Award. He has participated in various group exhibitions and projects in Bulgaria and abroad. His video art works are shown in the Bad Video Art Festival, Moscow, 2018 and in „Niglo“, 2017 as well as #VERYSHORTFILMFEST @ Vine, 2013. His performance art works such as „Pizza slut“ – presented at the DA Fest, 2015 and in the еXAF project space, Plovdiv,  while „I have a pale cultural dissonance, yeah like whatever fuck it and feelings and stuff“, 2017 and „LOL“, 2018 were part of the program of the performance art festival Sofia Underground. Valko Chobanov is the 2019 BAZA / Young Visual Artists Awards winner – a prize attributed by the Sofia City Art Gallery and Institute of Contemporary Art – Sofia.

“Art is fun for me. Most of what I do is a combination of messages and is a commentary on the social and institutional reality I have to work with. My main inspiration for creating art comes – as paradoxical as it sounds – from nature and the internet, at the same time. My motivation to continue doing contemporary art is due to my great desire to change the way people in Bulgaria look at it.” 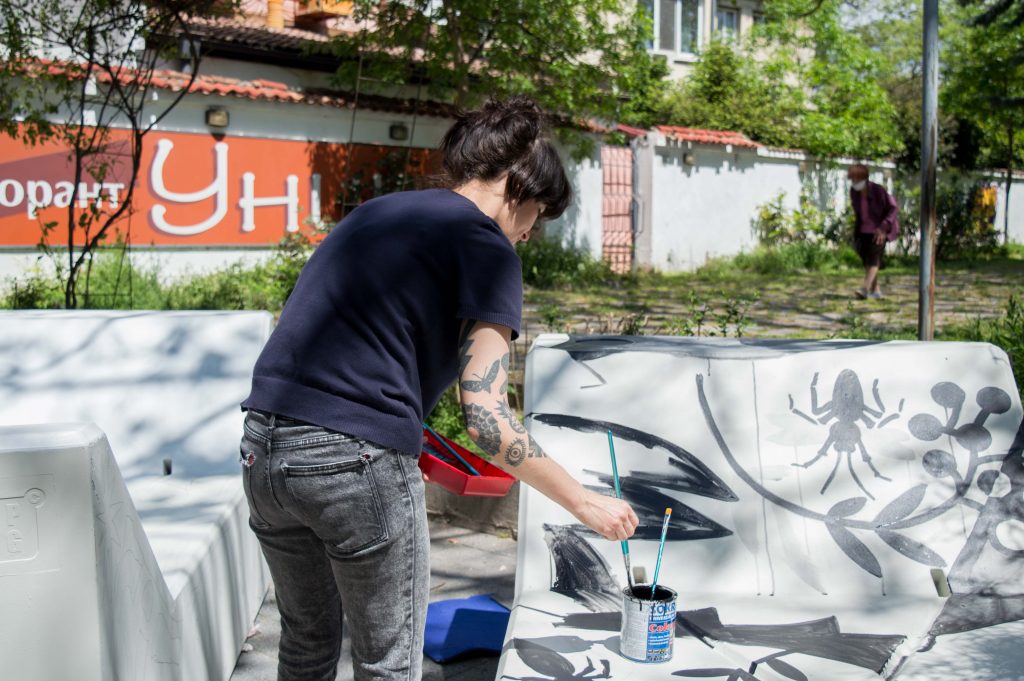 Season 2021 was opened with the group exhibition “ The Zoo of Earthly Delights“ by Alina Papazova, Alexandra Georgieva, Rosie Eisor. In addition to the art project, which resided in the space of the container itself the artists enhanced the plot by bringing in the three „enzies“ – the urban furniture that has become emblematic for its design and placement in the courtyard of MuseumsQuartier in Vienna, and around FLUCA. 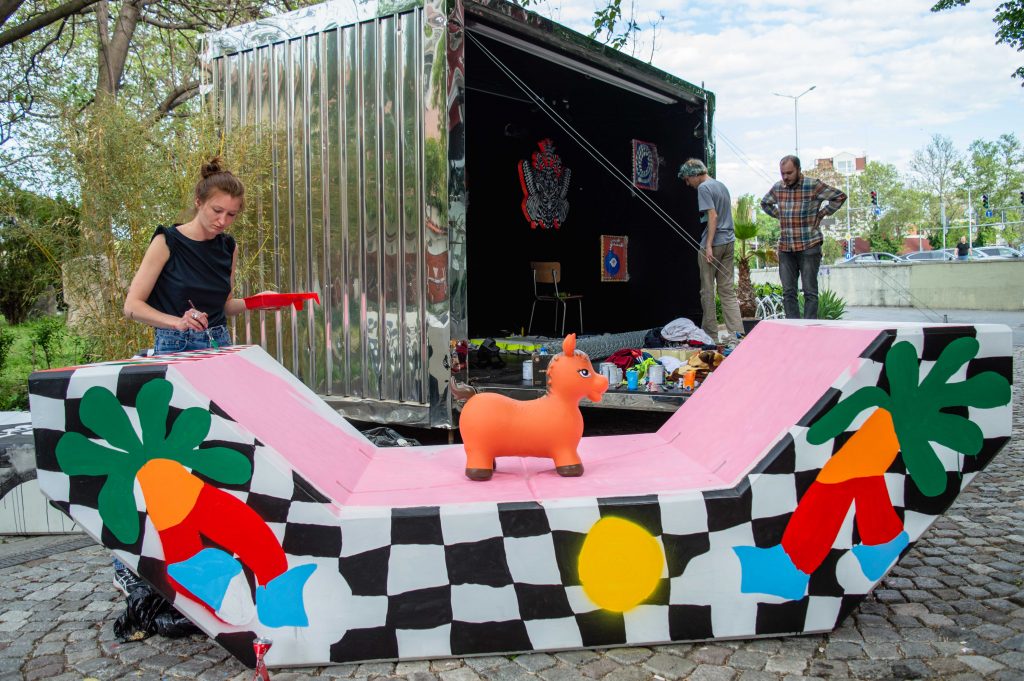 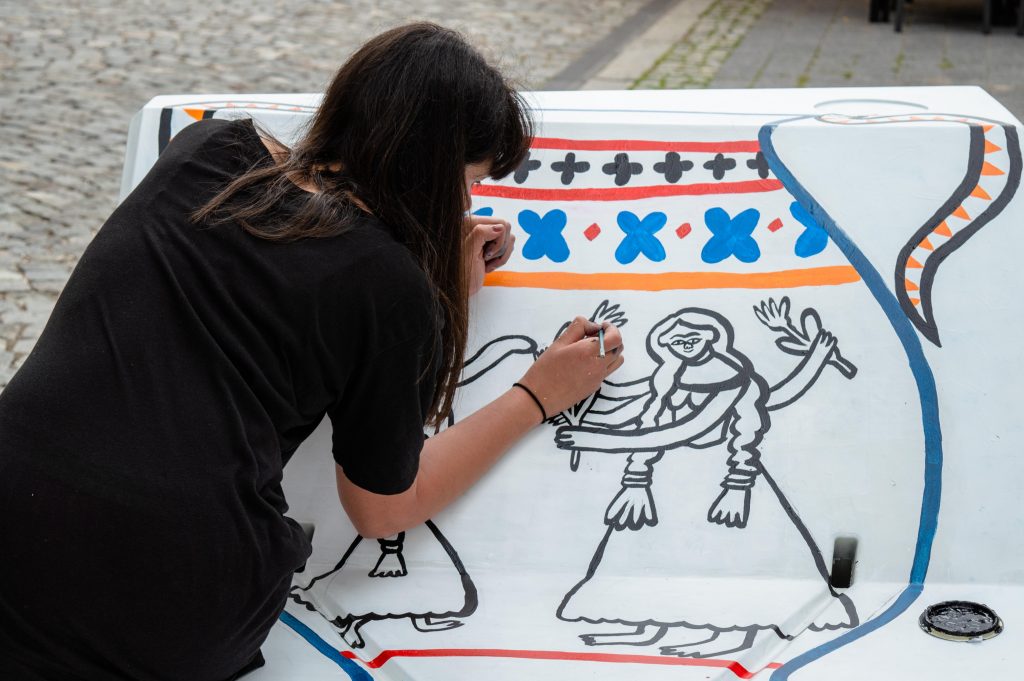 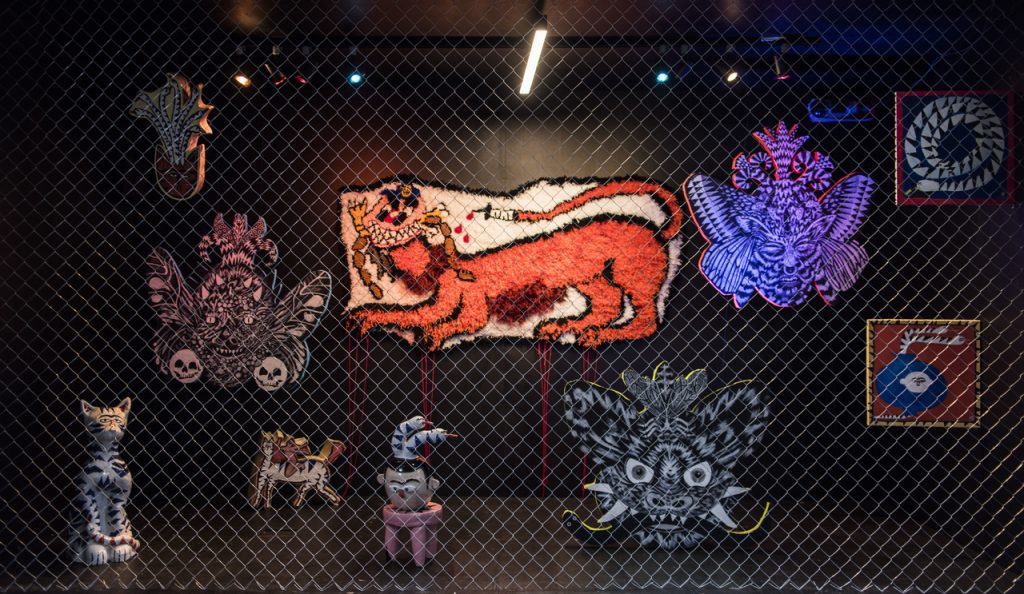 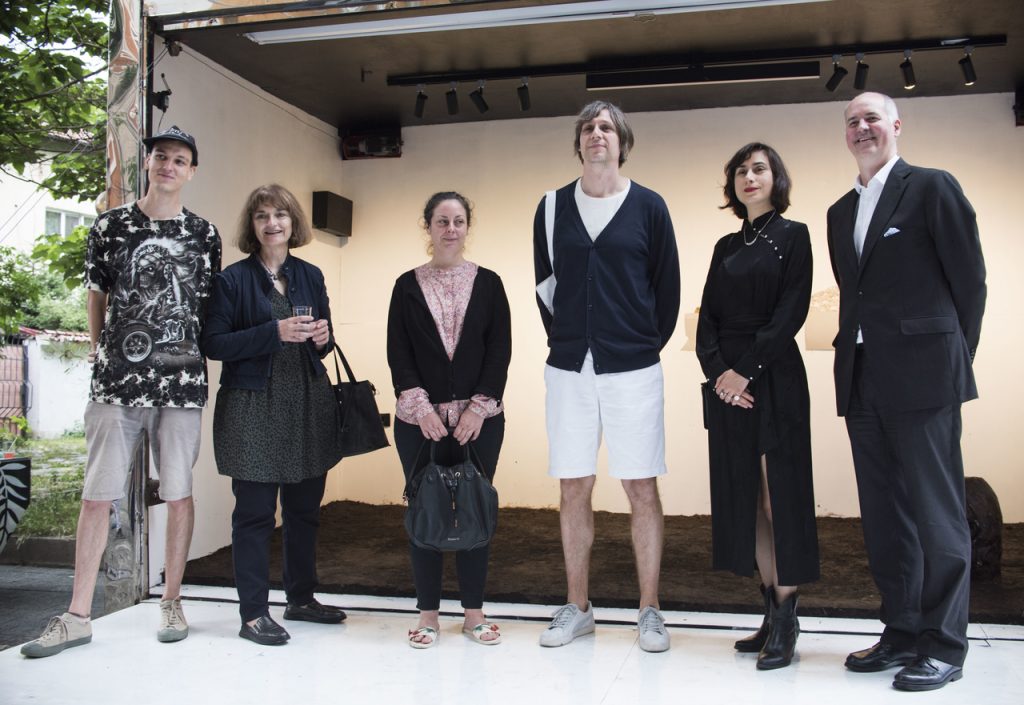 The second event of the season was the site-specific project of the Austrian artist Karine Fauchard and the Austrian-based artist of Bulgarian origin Lazar Lyutakov and their fourth collaborative project – „Poetische Tiere“. They turned the container space into a place for experiment inspired by archaic construction techniques with organic materials. 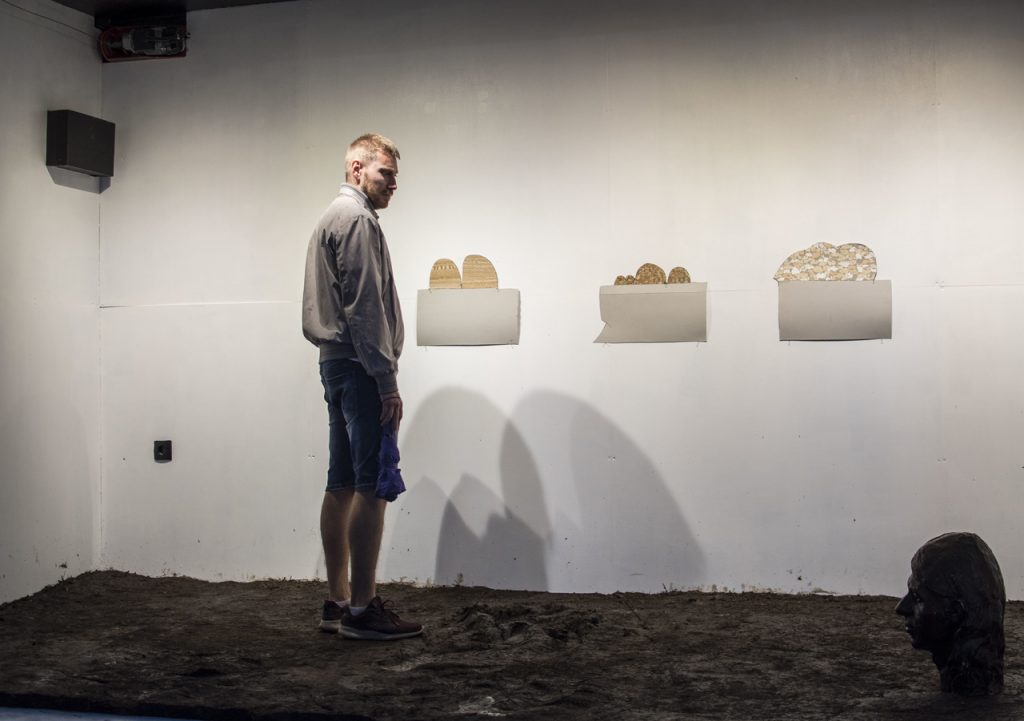 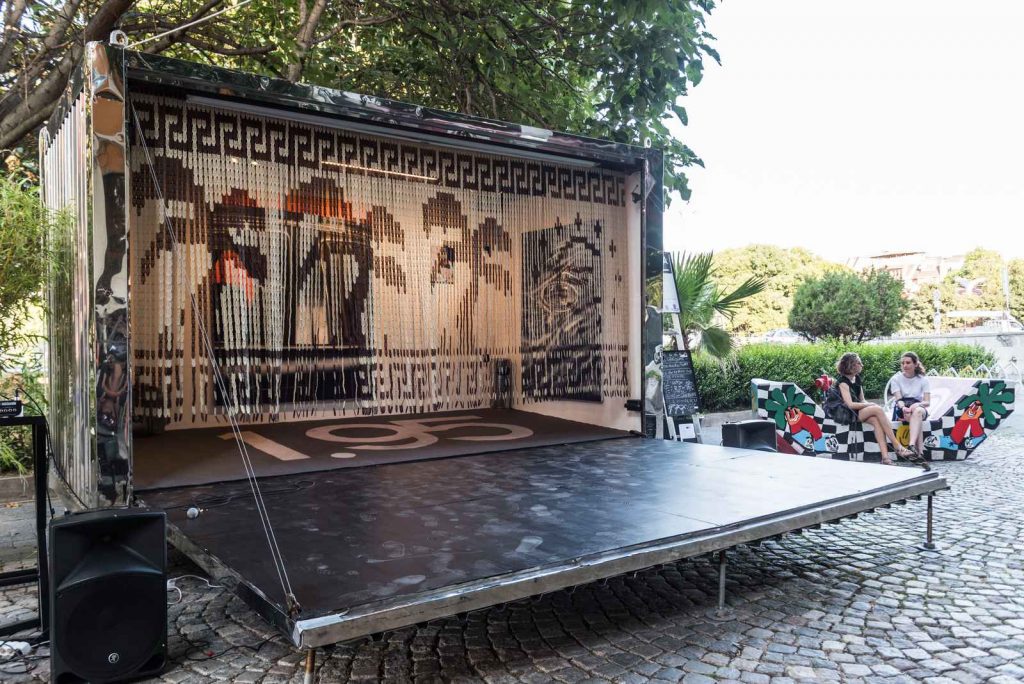 With his solo exhibition „At Liberty with the Time Frame“ Aaron Roth presented the visual code of the transition and with his paintings, he creates a sort of totem – however not of the products, but of the mannerisms in the attitude to them. 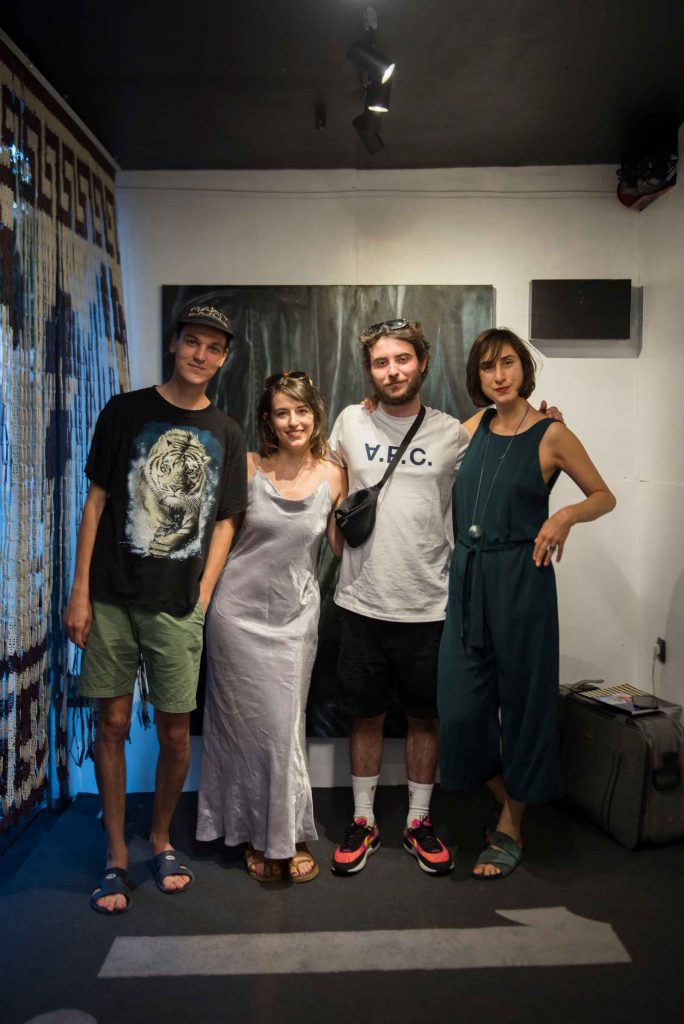 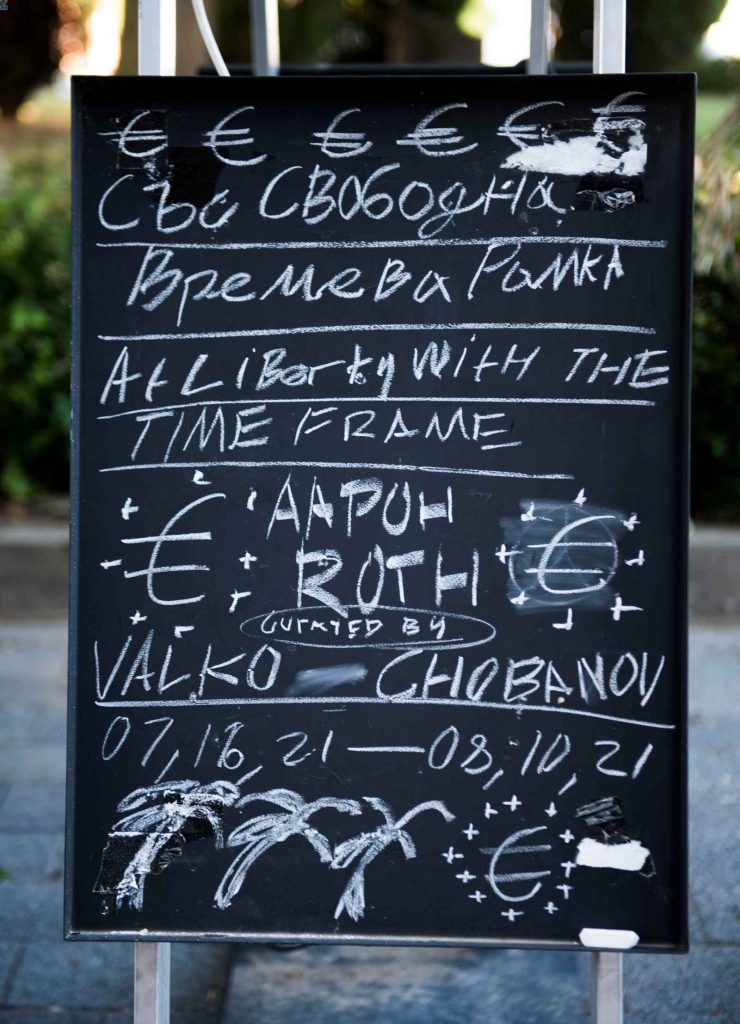 With his art project „BELCANTO“ the Plovdivan artist  Velizar Dimchev sought the correlations between the elite art of opera and the practices related to the processing of scrap metals. His work redefined the relationship between high art and scrap collectors – from visual conflict to surprising harmony.

The joint project of one emigrant and one immigrant – visual artists Lexi Fleur and Mitch Brezounek – „×º°”˜`”°º× ❹𝒶𝔩Ｇ𝔸 𝔭𝓊ηＫ ×º°”˜`”°º×“ included various fragments of life parodied in gold frames and a monumental figure of Mitch Brezounek, a sphinx or statue reminiscent of an ancient temple sculpture with glowing eyes and a fiery mouth, which turned the notions of grandeur, contrasting among the photographs. 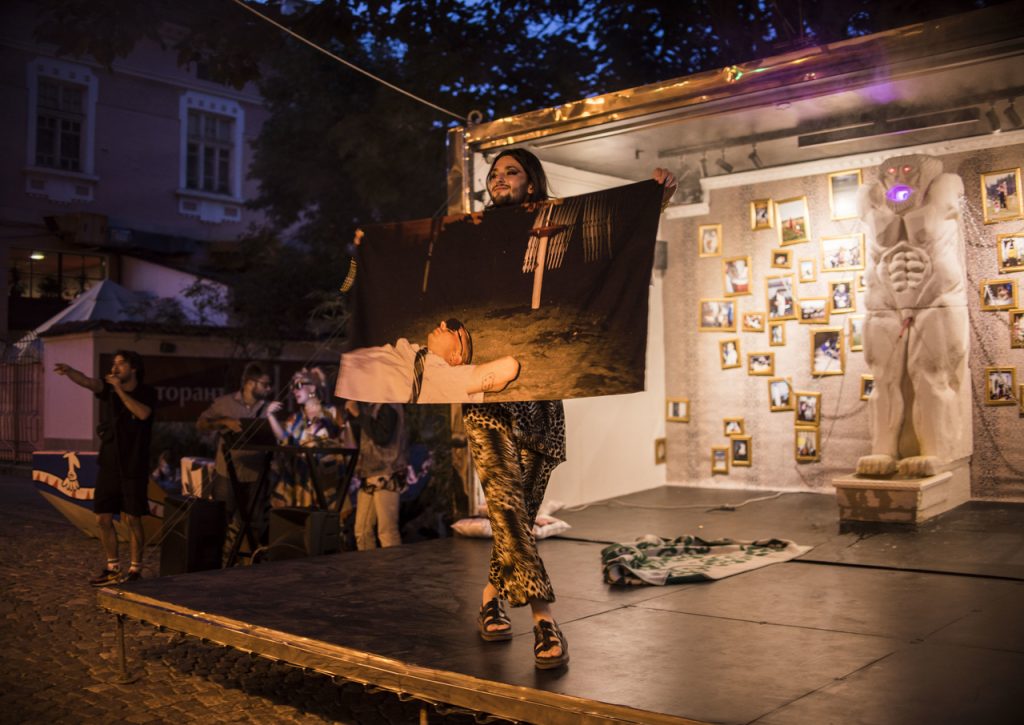 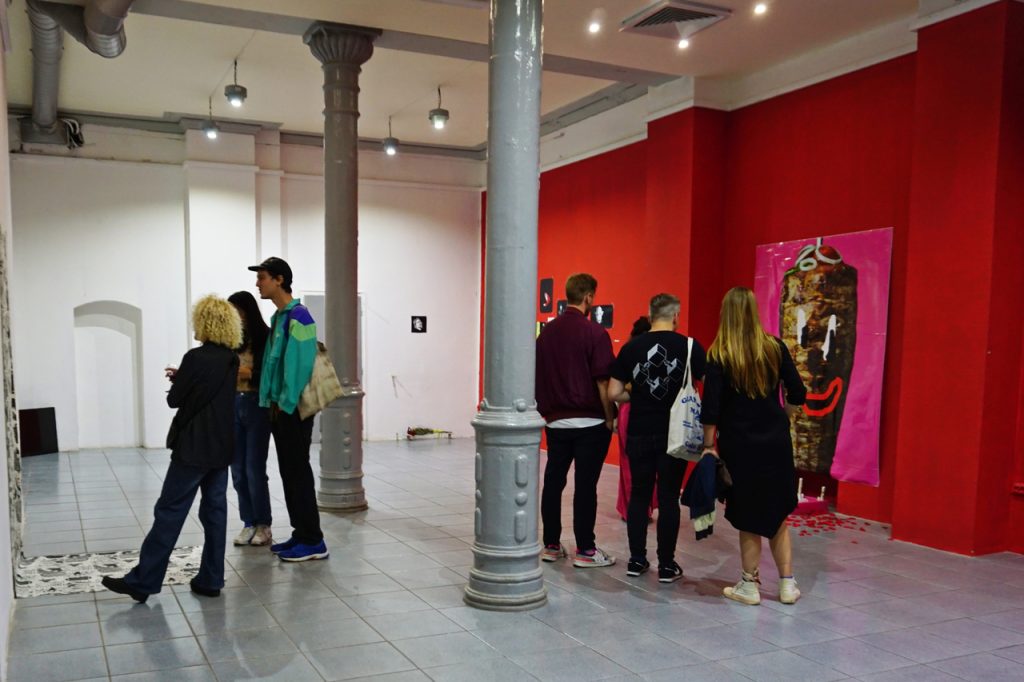 FLUCA – Austrian Cultural Pavilion also visited Sofia for the group pop-up exhibition „A thing that looks like another thing“ as part of the program of „KvARTal 2021“, in which participated the astists: Kamen Stoyanov, Krasimira Kirova, Mitch Brezounek, Trifon Tashev, Luīze Nežberte and Magdalena Gincheva. „A thing that looks like another thing“ focuses on gestures questioning how we determine the value of an artistic product. 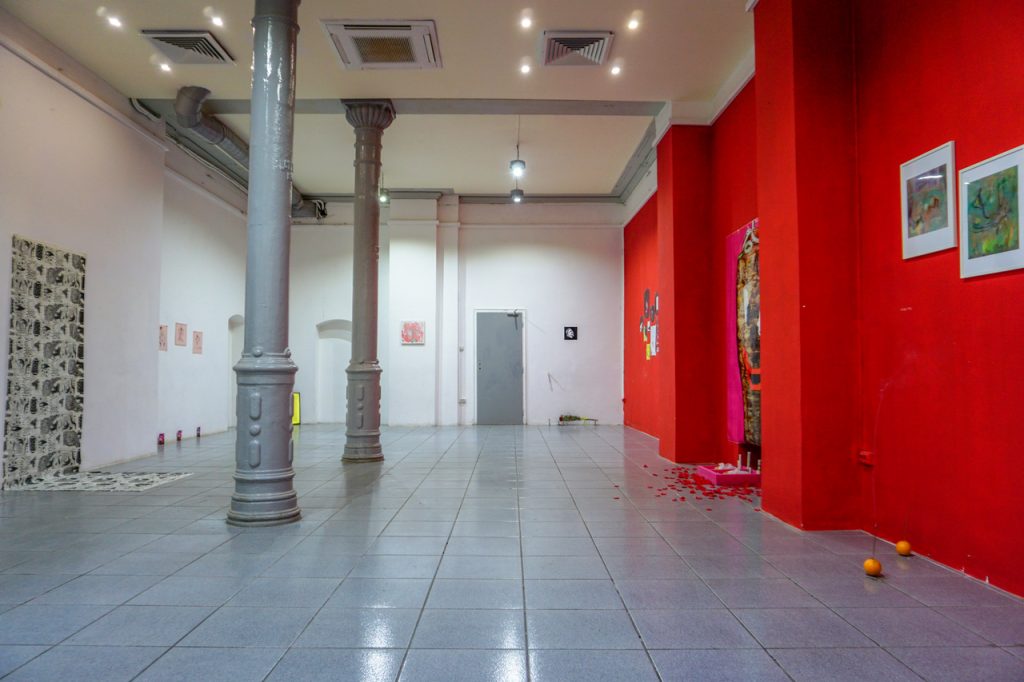 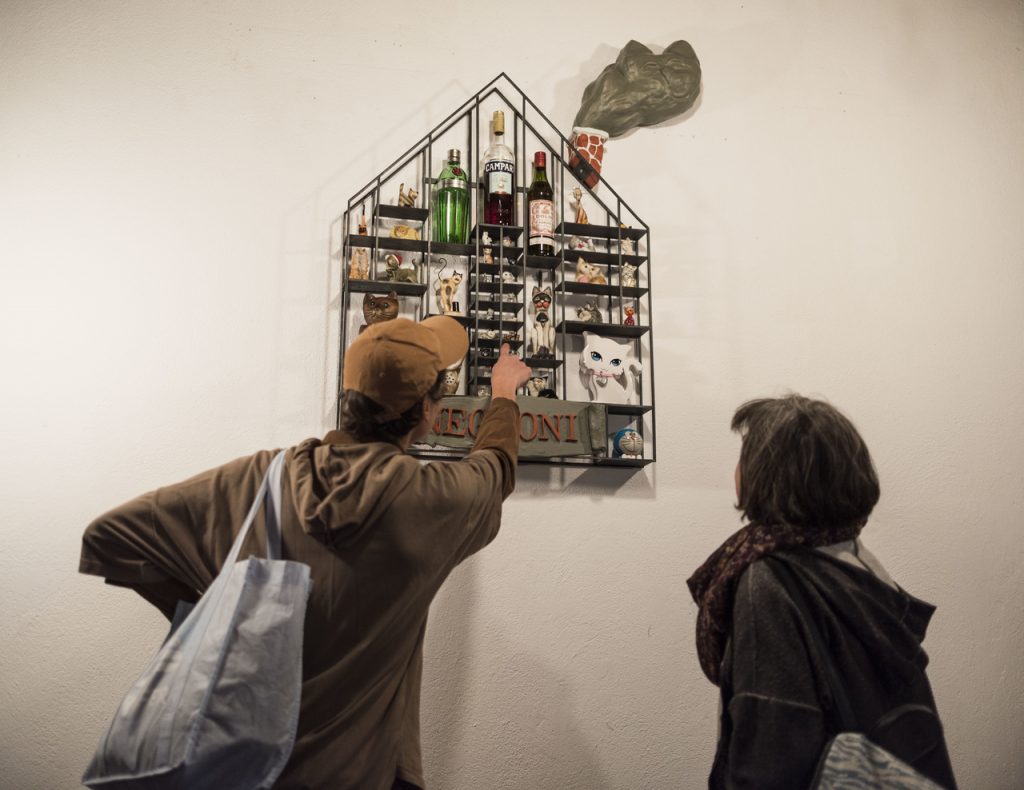 The last exhibition of the season was „Paved Paradise“ by the Austrian artist and cocktail enthusiast Gabriele Edlbauer. In her latest series of works, some of which were presented on the stage of Fluca, cocktails and recipes for their preparation were included not only in the titles but also as physical objects, such as finished products that contribute to the integrity of the sculpture. 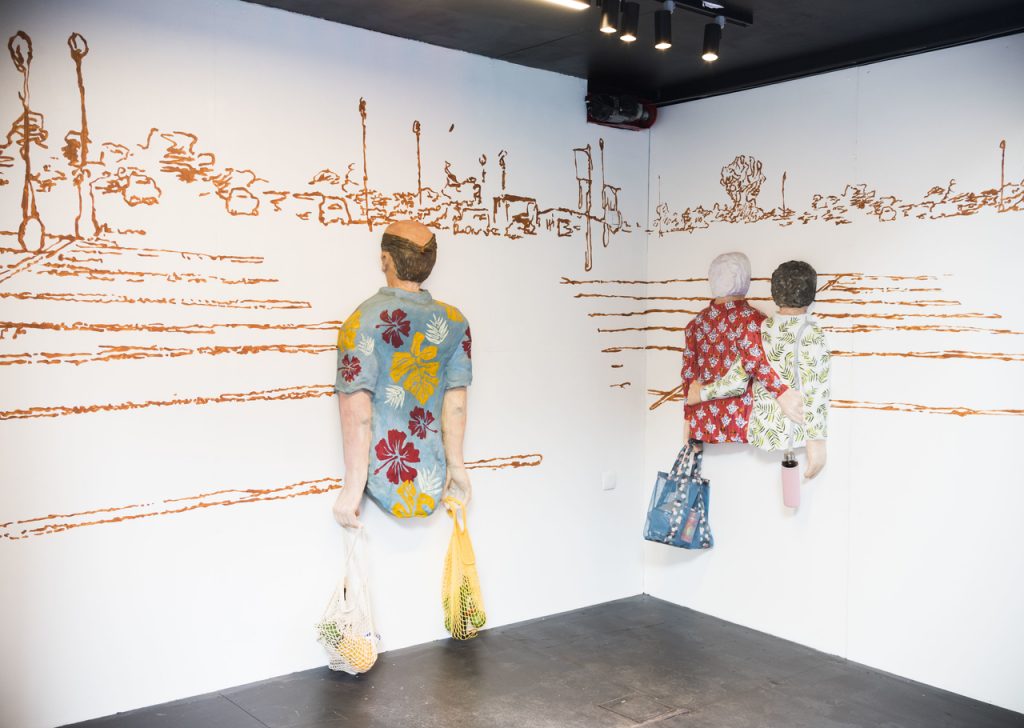 Learn more about Fluca at: 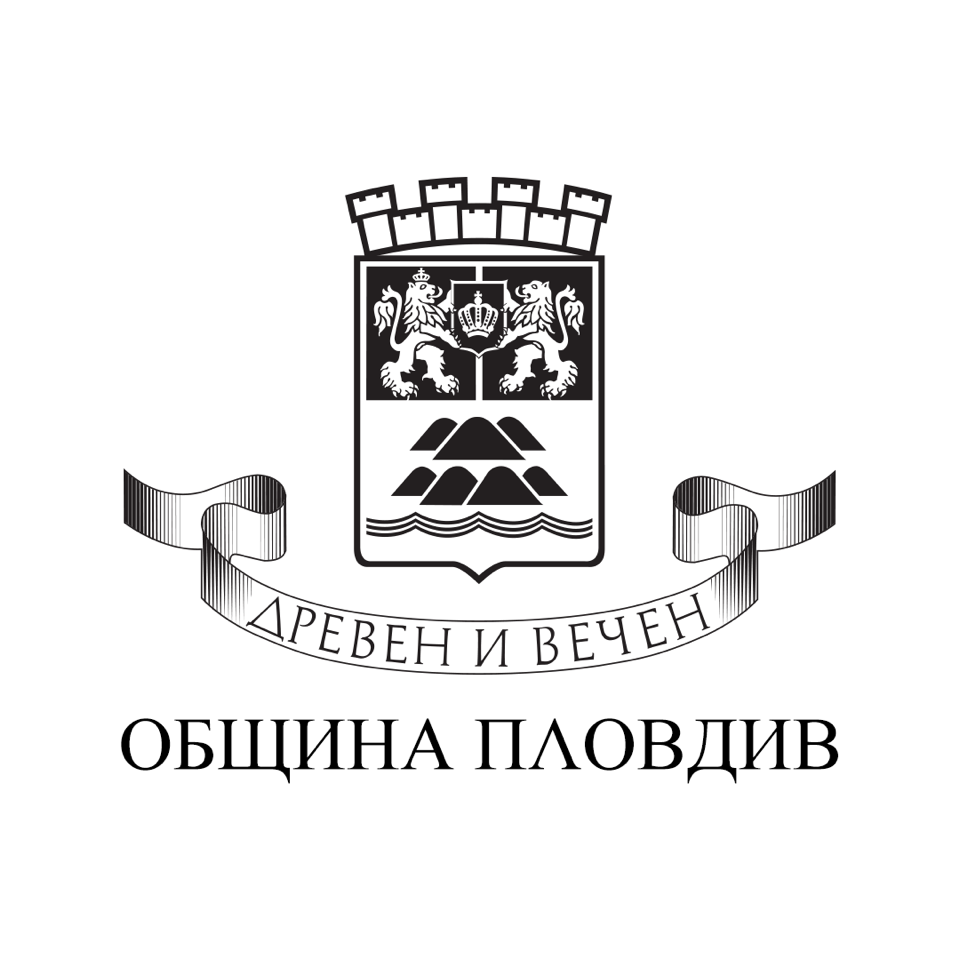 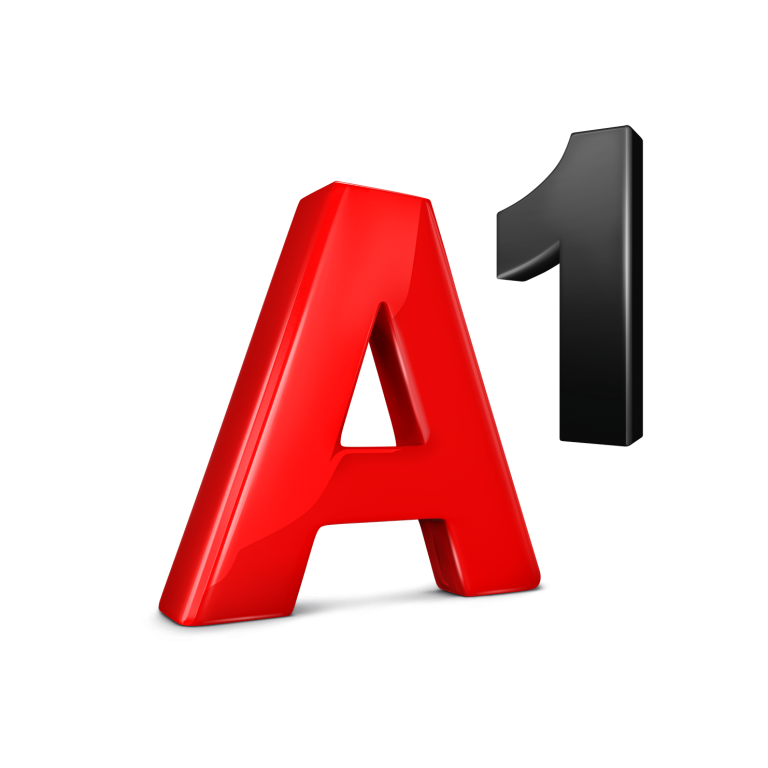